My two sisters are younger than I am, Sandy by almost four years and Janie by exactly nine. I didn't really know either of them until four years ago when we began to talk about our childhoods, getting material from each other to help figure out problems now. It happened easily; our perfunctory phone calls stretched into conversations. Janie remembers how she couldn't get new dresses because I was in Europe my junior year spending the family's money. Sandy, how I always interrupted her when she was in the middle of a sentence. How I called her best friend a cosmic drag right to her face. How I would terrorize her with headless dolls. We would probably be better friends/closer if we weren't sisters, since it's almost impossible for us to be together without dragging our parents/the family scene into our time. We can't seem to get away from the fact that we're three sisters competing for more. 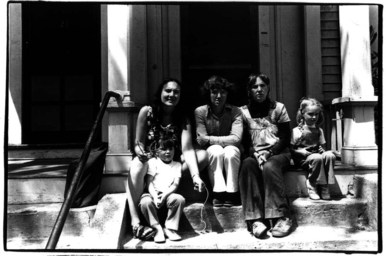 Now Sandy teaches physical education in Framingham, a suburb about fifteen miles away from Cambridge. The pictures of her here are from Christmas Day, 1973. She came over with some turkey and stuffing she wanted me to taste. It had come out better than ever before. We eat, talk about diets, cross-country skiing, yoga, how awful the holidays are. 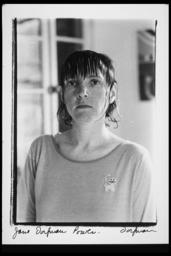 Janie was a kindergarten teacher for six months before she got married at twenty-three and moved to Middlebury, Vermont. This picture was taken summer 1973 when she and her husband and their two daughters stayed here for a few days. They took over my bedroom, all four of them sleeping on the king-size bed, visited aunts and uncles, my grandmother in the Hebrew Home for the Aged, my father and mother in Newton, Johnny's father. They'd collapse back at Flagg Street at night, saying how glad they were to live in Vermont where nobody says your child's face is dirty, you should wash your car, come visit. Since the picture with Lizzy, Janie has lost ninety pounds and become pregnant with her third child. 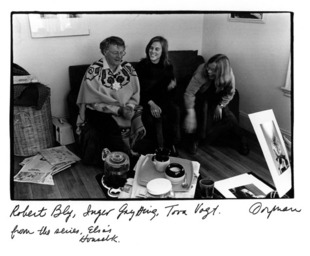 Spring 1972 there was a meeting of Small Magazine Editors and Publishers (COSMEP) in Boston and, at the same time, a huge poetry reading series at Tufts. Robert Duncan, Robert Creeley, Robert Bly, Mark Mirsky, Inger Grytting, Jan Eric and Tova Vogt from Norway, Anne Waldman, Ken Irby, Lynne Lawner -- all poets and all in town. Creeley and Duncan stayed at my house. Jan Eric and Tova across the street at Mather House, Mark and Inger at his cousin's in the Square. It was beautiful weather; the forsythia was in bloom in the backyard. The daffodils were up. The living room was bathed in light. We drank tea and talked -- the sounds of Norwegian a counterpoint to our English. It was the first time in a long time that Inger was with friends from home; she was laughing and blushing and talking very fast to Tova. 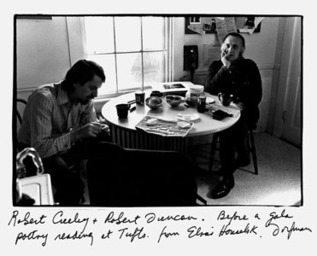 Mark's father came over; he examined all my plants carefully, prodding their soil, and advised me to give each of them two ice cubes every day. Mr. Mirsky was especially knowledgeable because his father had been a florist, in fact head of the large and famous Boston flower market when it was in its heyday, housed in a round glass building in the heart of the city.

We were all generally excited, by the readings, by the weather, by being together in one place. During this high, Mark encouraged me to put all the pictures I was snapping into a housebook, telling me in his grand historical way that in the nineteenth century everyone kept a housebook. In terms of my work, this was really quite early. Before I was given a fellowship at the Radcliffe Institute, before I took my supermarket wagon to Harvard Square to hawk my photographs at Christmas. Before Mildred Beckwith found me the couch and I was able to bring my red daybed upstairs. So the pictures of Bly, Waldman, Duncan, Creeley are really the first Housebook pictures, taken at the birth. 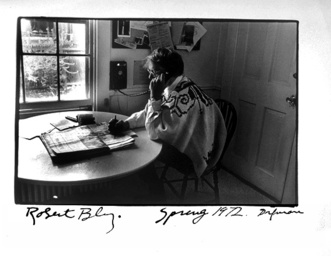