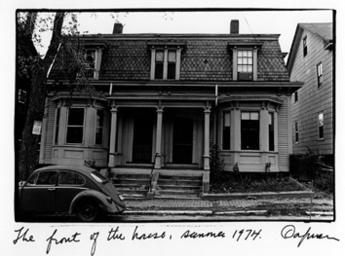 It's a duplex house, three rooms upstairs and three rooms downstairs, a cellar, and a backyard. Ten minutes outside Harvard Square, by the Charles River. Owned by Harvard University, as is half of the street. Right next door to Mather House, one of the Harvard residential houses. I found it in May 1968, after checking every day at nine in the morning and four-thirty in the afternoon with seven different real estate offices for six straight weeks. It is considered to be a great find.

When I got it in my mind that it was time to move, that spring 1968, I'd been living in a two-room apartment on Cambridge Street off Harvard Square for four years. It had been the first place that I'd lived in by myself and it was where I sort of established myself, bought myself a set of dishes, silverware, pots and pans, a bed, a chest of drawers, a Mixmaster, a vacuum cleaner, bookcases. Until 1964, every place I'd lived in had the feeling of being temporary and none of the things in any of them had been mine.

Living by myself, I got used to having friends over, to having a life that was centered, that was mine -- not dependent on the goings on of roommates and a gang. I began to cope with the fear of things getting better [which turned out to be more powerful for me than the fear that everything would fall apart]. After I'd been there almost two years, I picked up a camera and learned how to use it/develop film. In a while, it made sense to have a darkroom, and so I painted one wall in the bedroom/living room flat black and made an elaborate blackout curtain that I could unroll from the ceiling when I wanted to work. My chemicals were arranged on top of my dresser and a filing cabinet. The whole place reeked of fixer, but I got so used to it, I only noticed when I had company. They would wrinkle their noses and sniff, 'What is that!'

So, Flagg Street was a huge change. For one thing, it was twice as expensive as the little apartment, and I was putting down my only $200 as a deposit. I had no steady salary. I had just begun to work as a free-lance editor and wasn't ready to make money from my photographs. Norman Gordon, who's very practical, tried not to worry about the financial implications of what I was doing.

And though I was committed to the idea of being a photographer, having an enlarger and trays and a lot of paraphernalia is different from turning a whole room into a real darkroom. If you do it, you have to use it. And spilling out of two rooms isn't filling six. I knew I was taking a risk. I can't remember/decide now whether I was terrified or not. I did make list after list of minute details I thaught I had to remember; decide, change my mind, decide again where new electrical outlets should go; and fight with the man who sanded the floors and the plumber who installed my red darkroom sink and the shower. Sure symptoms of something. But I kept telling myself the worst that could happen was that I'd have a nice place to live. For a while, I would owe a lot of Harvard Square merchants a lot of money, but I'd pay the bills sooner or later. It was so airy and light that May morning that I knew I should sign the lease fast. It was going to be an easy place to live in, to fill. There was room enough to have friends over; there was a kitchen to sit in; a backyard to go out into. A stoop. I took the house without showing it to anyone. Gail Mazur. My mother.