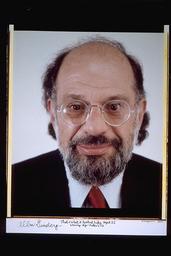 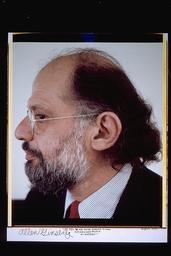 I met Allen Ginsberg in early July 1959. I had just graduated from Tufts and got a job as a Gal Friday at Grove Press. I answered the phone, hello, Editorial. I made coffee for the poets and writers Grove published in its Evergreen Review. Allen was one of the poets. He came by the office every day to use our Apeco machine, a precursor of Xerox which made crinkly orange copies that faded. It was a miracle machine. We hit it off right away. Allen had a zillion ideas and I was willing / eager to work zillions of hours to help make them happen. I adored him and was very compliant.

Poetry readings in colleges all over the country. A new idea in 1959. Why not. Publishing small editions. Why not?? I sat on my bed and typed, no electric typewriter back then, four letters to EACH college in the country. Readings began to happen.

When Allen came to Boston, he used our house as his headquarters. He made appointments for interviews, gave interviews, made phone calls, got phone calls, brought home boyfriends. Later he would come with explicit dietary instructions: no sugar, no salt, no meat, macrobiotic this and that, rice milk only. I would go to Bread & Circus and scour the aisles for the right stuff. Allen would be happy. And at three in the morning, he would wake up and go quietly into the kitchen to eat the peanut butter, the sourdough bread, the stuffed chicken, the real ice cream.

When I became a photographer, in 1965, Allen became a willing subject. He intuitively understood the camera. Pretty soon, photography was part of our ritual of being together. The next thing I knew, Allen and I had been friends for thirty-eight years. How'd it happen? Well, we each had a knack for friendship, and we each assumed the other would simply always be there. And what is special about tonight's participants, is that, in the spirit of Allen, there is a lot of long-time friendship collected in this room.