Heaven Is the Freedom You Never Had: Jim Begin 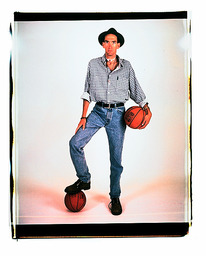 What is it with me and my not wanting to have my picture taken? At times I've taken my photophobia to the extreme purging all family and extended family collections of even the faintest shadow of my likeness. Unable to understand my attacks on their family albums relatives have taken drastic measures to safeguard pictures which I might confiscate and dispose of. When Elsa took my photo I do believe it was the first time in my life I'd seen a photo of myself which I actually liked.

Why don't I like to look at old photos of myself? I think the answer to that question lies in the way I approach life. Much of my past has been filled with hardships. From growing up poor in a troubled home to learning at a young age that I had a serious illness life never was all that easy. I learned the best way to see the future was to always have a better vision for tomorrow than memory of yesterday. Pictures, memories, even people were often too much of the harshness of worn out times to carry into the future. Periodical purges of revealing photos, memories turned to nightmares, and old friends who were now acquaintances were all a part of moving on.

The body has withstood much, battered and worn down by years of illness. It becomes hard to think of having a picture done which makes you look "good" to observing eyes. The years of waging war to simply survive has changed so much of my physical appearance. Once a healthy adult my 6'4" body weighed in at a solid 190 pounds. Battle after battle has taken their toll and now 145 pounds of a bony frame stand up against the strength of a strong wind.

Changes to the body, painful changes, make if difficult to still feel the same way about yourself as you once did. Photos often seem to capture moments of pain as well as high times. In old photos I often see the pain of bad times or feel sorrow for better days that will never return. The body has changed much. Bones now stand out where well developed muscles once made me proud of my body. Ribs covered with only a layer of flesh to define the wasting of a young body.

I once asked myself how attractive a body could appear which had an illness moving within it that would kill. A part of the vision is death, the image is one of a body fighting a slow losing battle. A part of the vision is life, a spirit hanging onto its only known way to stay connected to a fragile yet beautiful world. I have seen death in the eyes of people near the end of their time, in the photo Elsa did I still see life in my own eyes.

I must explain the basketballs......., the logical conclusion would be that basketball has somehow played an important role in my past. To a strong extent basketball was once the center of my life, a skill I worked to develop, and learned well. For this photo the basketballs are less a reflection on the past and more an insight into an obtained faith in some future beyond illness and life.

During the early years of struggling with a serious illness fear of death drove me to look for the answer to the hard question.... "what is the meaning of life". I explored the traditional, investigated the non-traditional and even considered the ridiculous philosophies of the world in a search for answers. There was an ongoing effort over several years to bring together some understanding of what life and death was all about. Working through the fears of my own death I searched for a vision of peace beyond the world I knew.

I gave heavy consideration to several traditional religions, but in the end concluded that anyone who guaranteed me the perfect answer to all my questions was more confused then I was (but a confusion I respected). Next an attempt was made to develop a vision of what is widely declared paradise or Valhalla or heaven. For me it would be a place of ultimate freedom, perfect physical and mental health and where the company respected each other for being who they were. My paradise was a place where I could be me and be at peace.

As I examined my life I worked to identify those moments when I had felt on top of the world and in total control of my life. Memories of playing basketball back years ago brought back feeling of physical strength, innocence, hope and a faith in the future. For me a sense of peace came from remembering back and concentrating on those good times. Running up and down the basketball court on solid muscular legs. Feeling the full usage of my body and knowing I was very much alive. It was a time when getting a decent dunk down and working up a good sweat were the only cares I had in the world.

So my vision of heaven naturally had to incorporate a basketball court or basketball courts. Paradise is like any of the many courts I've played on over the years. You have to know the people here, playing this game, to know how different this is from any game that I could have ever played in my lifetime. The people who come to this place are the people you see suffering through life. The admittance to this game is based on hardships survived, courage, and a spirit that endure more then most.

People come to this basketball game to experience unfulfilled dreams, make up for years of lost independence, and to learn how free the spirit can be. We were the sick of the sick, those confined to wheelchairs, those that people had little hope for, those at the bottom of society. Those who wanted no pity but got labeled charity cases. Now the air is fresh, the time is new and we are stronger then most. At a prime time in life we were forced to sit on the sidelines, or live as outcasts. In heaven we are the embodiment of courage and endurance. We stood up to the worst life could offer and emerged with our pride intact.

As I look at the photo Elsa took I think of the next stage in my existence. I think about the place I will be going....... and I am not afraid. The day will come that I am strong and free again, and in the dignified company of those who lived life as I did. We will know the burdens we each suffered, but our direction will be toward feeling freedom as no other group of people could. I would label the photo "Heaven is the Freedom You Never Had".

The body has changed so much over the years. Gone today are the shirt stretching biceps and chest muscles that I once took such great pride in. Those hours in the gym were spent on short term vanity. Today I can look at myself and realize all the health issues I once took for granted. As with all people those days were only meant to last a short time. The body is only meant to last so long before a journey is concluded.

I look at the "big photo" Elsa took and I can't help but think about what people think when they see me now?? I hope they would see a spirit who fought one hell of a battle and lived the tough times with courage.

(elsad@comcast.net) This essay is part of Grief and the Healing Arts:Creativity as Therapy, edited by Sandra L. Bertman.