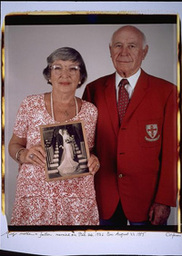 It is wonderful to be with family and friends who knew my mother and who know us. We are so grateful that you all made the effort to bury Elaine with us and to show us your love. We have talked a lot about my mother, and of course my father, during the seven years of their illnesses, and especially during the six days of our vigil at Elaine's bedside. We've talked a lot about life, sitting with her dying, and realized that bonds, among us, and among our family and friends are what matters most. We are determined to make time for friendship among the family and our friends and to try not to be too busy for what really matters. As we sat w/ Elaine we all exclaimed that somehow we had cleared our calendars and were with her, and our career worlds hadn't collapsed. We couldn't believe it had been so easy. So here's to latte in Cambridge.

We came to the conclusion sitting those six days and nights with Elaine, who couldn't hear us and couldn't respond to us, that we each had a different mother, especially me and Janie, nine years apart.

We knew she couldn't hear us, even though the doctors would shout, Mrs Dorfman, Mrs. Dorfman, it's me, THE DOCTOR, because we had yelled in unison, MA, JANIE BOUGHT FIVE HUNDRED DOLLARS WORTH OF ESTEE LAUDER

and she hadn't bolted out of her bed. She was definitely gone. Julie and Elizabeth, and Matt and Isaac had an adoring, attentive, proud grandmother. We all agree on that. And we all agreed Elaine adored my father. DORFIE as she used to call him. She loved the story of his first day at the Stop & Shop. It was one of the stories she remembered till her last six months.

I was always perplexed by my mother. I could never figure her out. Even though she talked all the time and was VERY verbal, I couldn't understand her. She never satisfied me. And as you all know, she cd never figure me out. We were agreeing adversaries, So much of what I became was in reaction to my mother.. I have no idea what drove me to that position Some of you can help me understand.. You can imagine my shock that I look and sound so much like her!

We daughters and the grandchildren have inherited Elaine's energy, her genius for friendship, her interest in people, her love of conversation and her love of gossip, or what we would now call the narrative of people's lives. We've inherited her use of language. her ambition. But luckily for us, no one is short-circuited in the ways I think she was. Our ambition and energy find places to go.

Always change yr tires by November 11, her birthday. Wear white shoes after memorial day... Always bring something when you go to someone's house. Always send a thank you note. Get to Filenes Basement by quarter of nine or don't go. Don't get INVOLVED. Whatever the cause, don't get involved. Never pay full price. Don't sing song. Don't look like an immigrant.

She liked to brag, I never get depressed. I have never been depressed. To brag:Stopping smoking is easy. I quit in a day. She liked to tell how electricity or was it gas came to her house as a little girl. How she had stood there amazed.. She liked to watch the fax machine work. She couldn't believe it... And of course, no matter what any of us achieved, she wd always ask: WHERE IS IT GOING TO LEAD. I was always tempted to say, the Nobel Prize ma, the Nobel prize.

But sitting in her tiny room, listening to her cough and moan and call out names We couldn't come up with a coherent picture to her puzzle. Maybe you can help us.

The one piece we do KNOW is her torment at her illness. She used all her intelligence to hide her forgetfulness She was very good at it. It took us a long time to agree among ourselves That the missing wallet, Taking the wrong turn back to the house Meant something.

Elaine never got over her awareness that something was wrong. Her conversation was a poem. She sounded like Samuel Beckett She would ask what's wrong with me??????? She would talk about how awful it was to lose her memory. She hated being separated from Arthur She hated sleeping alone. She wanted my father. She wanted her mother.

She hated when I took away her telephone Because she called me ten, fifteen times a day Weeping, crying, begging Breaking my heart.

The Saturday before her heart attack, she was dull, not high, on drugs. We need a telephone she said to me. It's terrible that we don't have a telephone. She said WE, as if my father was living with her or was she living with Bobbie and Zadie, It was like she was saying, we need electricity in the house, we need gas in the car.

Six days and nights we sat in a little room w/ our mother dying and we didn't kill each other we asked ourselves why BOTH our parents had such a terrible very old age. Who would have thought it during those sunny days on the Cape, those days in West Palm Beach, One parent maybe, but how come both? Of course, there is no answer.

We sat there watching, talking, using our cell phones who was coming, who was sleeping with her, who was bringing supper. Julie, John, Liz, mark, Harvey, Janie, Sandy, me.

We argued with the doctors. The MSPCA would have been outside picketing if a horse or dog were inside dying for six days We were perplexed by ourselves, by what we could be doing. we had no experience. Arthur had died in six hours. We even became philosophical maybe they were right, this was what dying was about.

Harvey read a Supreme Court opinion about end of life care We argued with the doctors and nurses some more, a little like Zadie, finally we found a doctor who practiced palliative care medicine. And Elaine died in peace a few days later, w/ Sandy's yoga music playing softly.

Now we are together with all of you who love us. We need you to remind us of the good old days, of what you remember about Elaine and Arthur before 1988. We want to hear about all the fun you had with them. We aren't daughters anymore.

read also my note on my father