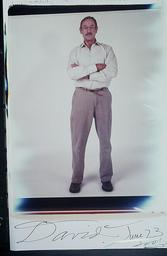 Be sure to watch the one minute movie Chuck Kramer made while I was photographing David Brudnoy!

David Brudnoy died in the most wonderful way. He sd goodbye to all his friends, he even had the last of his radio shows, like someone out of Beckett, the day before he died, from his hospital room. He had decided he had had enuf pain and that it was time to go. He was a great teacher and perhaps his greatest teaching was showing us how to die, to leave, w/ grace. To say goodbye and call it quits. It was a lesson even for his doctors I'm sure.

I first met David when Allen Ginsberg was on his program in the seventies. Jack Kerouac called up to quarrel w/ Allen on the air. Allen didn't lose his cool and neither did Brudnoy. Jack jack you don't get it i remember allen saying. I think they were arguing abt the vietnam war. then of course over the years many hours sitting in david's home studio or wbz while david and harvey silverglate did a program together. during the commercials was the best part. they had such a good time together discussing whatever. The cavalcade of Brudnoy guests is a time capsule of our period. Unfortunately, Brudnoy NEVER kept an archive of his programs. It is hard to believe. Maybe there is someone out there w/ a secret cache of Brudnoy programs. It wd be great history.

It's hard to figure who will replace him in Boston. He is irreplaceable. He knew everyone. He introduced people to people. He told people what other people were doing. He loved making connections. And he never let differences of opinion stand in his way if he liked the person. He just discussed, not argued, but discussed and discussed and discussed issues w/ that person. He was open and friendly w/ people w/ whom he disagreed. He shared every aspect of his life w/ whomever he was w/. He was just great on the radio. He had listeners/callers who had called in hundreds of times over twenty five years. He wrote a book called Life is not a Rehearsal, available on amazon still. In it you realize how much david suffered as a gay young man at yale in the fifties and early sixties. and you realize how much david changed in the forty odd years since yale. how different he was in his last fifteen years. different from the person who wrote the book. As my webguru kyle nicholls says, his complexity is compelling.

He was like the energizer bunny, teaching, reading, writing abt movies, always on the go. Endlessly precocious. Even if he was tired, and even when he was sick, he didn't let that keep him from going, going going. once harv silverglate and I met david in paris and we struggled to keep up w/ david ....he was coping w/ aids and was always a block ahead of us. if we met for dinner he had seen four monuments to our one. He loved his students and loved being the grand uncle to them. He wd take them travelling, take them to nice restaurants and introduce them to all kinds of people. He was the ultimate mentor. One of my portraits is of David w/ one of his students. He took the role of teacher to these young men seriously. He felt he had benefited from relationships w/ older men and that it was very important for young men to have such relationships. He was the perfect uncle in the way a dad cd not be perfect. To get a flavor of him, be sure to watch the very short movie done by chuck kraemer. One of the funniest things abt david was that when he went out of town, even for a short weekend, he wd tell everyone on his personal email lists NOT to write to him between six on friday nite and eight on monday morning BECAUSE all his emails wd be deleted w/o being read. No exceptions. the emails automatically went into the trash bin I guess. Or maybe David was being mischievous and he did read emails when he got home from those the most insistent. But now he really is out of email touch. Be sure to find the links to David on the WBZ web site, wbz.com