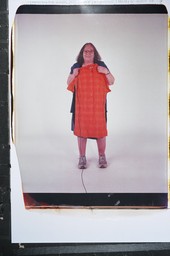 I have been photographing myself since about 1970, about five years after I picked up the camera. In the beginning, there was an initial shyness about turning my camera on myself. What me, an interesting subject?

Then I went through a phase, almost religious, during which I believed that I had to take pictures of myself so that I would know what my subjects went through when they faced me and my lens. I was sure that my comfort behind the camera was related to my comfort in front of my own lens. Now I am sure of it!

My next phase was taking portraits to cheer myself up--to look at myself and say, hey you're not so bad. Life isn't scarring (scaring) me so much. All this was in black and white and small format.

When I hit the big time (figuratively, with the Polaroid 20x24) the angst that drove me when i took pictures in small formats w/ black and white film just wasn't there.

In front of the huge 20x24 camera, I was instinctively more commemorative, more celebratory. Maybe it was that the film was so expensive, it hardly seemed worth it to document feeling blue. Or maybe it was the scale. Who wants a big blue portrait of herself?

Maybe it was that by the time I got to my studio and turned the lights and camera on, I was upbeat and thankful. Or maybe, and I think this is it, my life had changed. I didn't have the time or I didn't have the energy to focus on myself in that narrow way that i had had in my thirties.

When i hit my seventies, I was incredulous. I tried to remember how my mother looked at seventy. And my two grandmothers. Was i in that boat now??? It blew my mind. For two years i thought i was 73! Now here comes 75!!!!

Are you wondering about the black balloons? It's a story: we don't make a big deal about birthdays in my family. On my 51st birthday, my husband Harvey Silverglate called me in the middle of the morning to see how my day was going. I told him turning fifty had been fine, but 51 was a different story. Being five years younger than I am, he didn't sympathize and we talked for a few minutes about stuff.

Then an hour later, a man in a tux appeared with eighteen fabulous black balloons from, who else? HARVEY! He had sent me a black cloud . What could I do? Laugh and walk down the street to my camera with our son Isaac. The fourth image in the queue is the very first balloon portrait.

The black balloons went on for years. Sometimes Harvey added red balloons for whimsy. I wd have an annual chat w/ the woman who scheduled deliveries and w/ Jack the delivery guy. He stopped squirming into his tuxedo right after he pulled into our driveway. There was no need for the ooooo aaaaa effect.

I wd go to my studio the minute the balloons arrived. Harvey and I always managed to take a portrait, sometimes just at midnite. Eventually, the company he ordered the balloons from sold their business and it just wasnt the same. The idea had run its course.